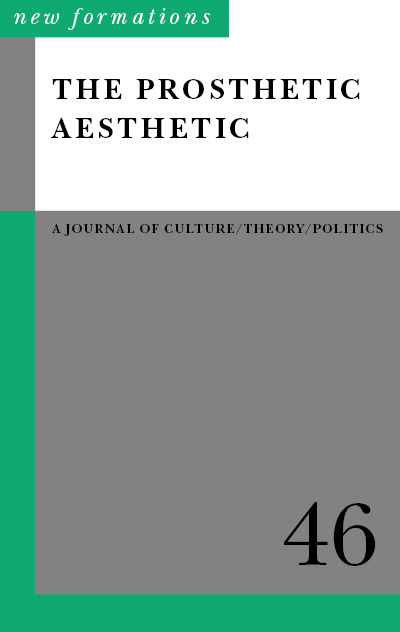 In considering the bonds between modernity, technology and the body, there is no better place from which to begin than from the figure of prosthesis. This themed issue of New Formations brings together a series of articles that approach and question prosthesis in general, and do so specifically in relation to aesthetics. Hence the convergence that is our title, ‘The Prosthetic Aesthetic’. Implicitly engaging with the etymological derivations of each concept, the aesthetic and the prosthetic, these articles re-articulate the ways in which we ‘perceive’ (Greek aisthetikos) the ‘place’ (Greek prosthesis from prostithemi) of the prosthetic within the culture of modernity. Building on work carried out across the Humanities and Social Sciences over the last ten years or so, these texts extend our thinking on the relationship between aesthetics, the body, and technology as an a priori prosthetic one.

This past decade has witnessed the emergence and dissemination of discussions around prosthesis as an historical, philosophical, technological, political, ethical, and medical concern. The subject of prosthesis has been raised in the discourses of cultural history, critical theory, philosophy, literature, cyberculture, and the visual arts. There is also a large body of knowledge that has contributed to debates surrounding prosthetics, while not necessarily being on prosthetics as such. ‘The Prosthetic Aesthetic’ places itself squarely within this literature, and at the same time offers something in addition to it. For while there is a great deal of writing on prosthetics and its associated concerns, this is one of the first collections that examines the confluence of the body, technology and prosthetics in an aesthetic and visual forum. As such this issue considers various aspects of visual culture including ornamentation, drawing, photography, body tracing, performance, theatre, body art, sculpture, installation art, television, video, and (digital) film. The modalities of these visual media are examined through the discourses of philosophy, psychoanalysis, media studies, history, feminist theory, art history, critical theory, and medicine as a means of unpacking certain types of consequences borne of prosthesis. Instances of these prosthetic concerns which are presented here include the issues of consciousness, compositing, the organic versus the machinic, the post-human, autobiography, indexicality, desire, the Other, the phenomenon of the phantom limb, deficiency, puppetry, and gestation.

A number of the articles published here were presented in one form or another at a conference we organised at the Institute of Contemporary Arts, London, in April 2000 entitled ‘Between Bodies and Machines: The Prosthetic’. Thanks go to Heidi Reitmaier, then Head of Talks at the ICA for being such a great host and to Barry Curtis at Middlesex University for its financial support of this event. Thanks also go to Jeremy Gilbert and Scott McCracken at New Formations for their presence, both real and spectral, during that event and to New Formations for their encouragement of and patience with this project. Special thanks go to the speakers at the ICA event and to all the contributors in ‘The Prosthetic Aesthetic’.