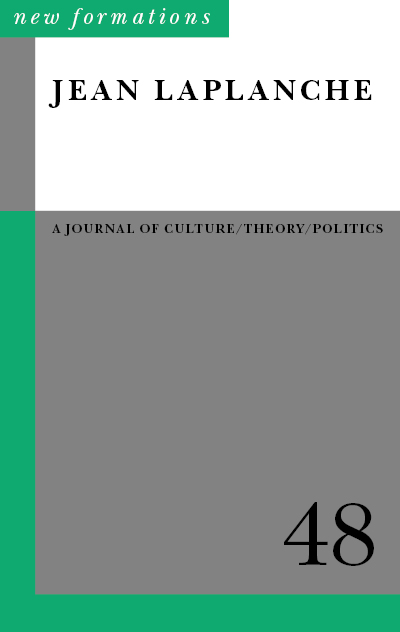 Editorial: recent developments in the general theory of primal seduction

This special issue has been conceived as an attempt to introduce the English language reader to the more recent work of Jean Laplanche and to those French psychoanalytic writers who either locate their work on the ground of the ‘new foundations for psychoanalysis’ as proposed by Laplanche in his 1987 book of that title and seek to develop it, or who, like Guy Rosolato in his essay included here, position their arguments in some relation to it.

Since the translation of the New Foundations for Psychoanalysis into English in 1989, Laplanche’s return to and reformulation of Freud’s restricted (and officially abandoned) theory of seduction as a general theory of primal seduction has been available to an anglophone audience in a bold if schematic outline, an outline that was developed and progressively filled in by the later essays collected and translated in Essays on Otherness in 1999. Here an account of the contradictory dynamics of the Freudian conceptual field and a critique of the core concepts of classical Freudian metapsychology were elaborated from a distinctively new point of view. This entailed both a reformulation of older Freudian concepts together with the formulation of new concepts, not on a one-by-one basis but systematically, as part of an ambitious ‘return to origins’, not only in relation to the conceptual foundations of psychoanalytic thought, but also in relation to the psychic origins of the human subject and the foundations of the human ‘psychical apparatus’. Core concepts, such as ‘the unconscious’, ‘repression’, ‘transference’, ‘the superego’ and ‘the drives’, were rethought on the basis of the theory of primal seduction and of a metapsychology that gave foundational force to the primacy of the (care-giving though not necessarily parental) other, the adult subject with an already constituted unconscious and sexuality, in the formation of infantile psychic life.

The work gathered together here continues the development of this metapsychology of the other and seduction. It does so by exploring further the implications of Laplanche’s formulation of what he calls the ‘fundamental anthropological situation’ of the human infant. He conceives this as a dual situation involving the infant’s need and dependency on the care and nurture given by the adult other (an inter-subjective situation marked by bilateral communication as described by attachment theory), on the one hand, and as well the implantation of enigmatic messages in the primitive body-ego of the infant via the adult’s gestures of care and expressions of feeling, both verbal and non-verbal (a unilateral transmission that is enigmatic because derived from the adult’s unconscious sexuality in a situation of primal seduction), on the other.

As well as developing this model of primal seduction, the work of resituating and relocating classical concepts and debates also continues in these essays: with a path-breaking meditation by Laplanche himself on the theory of sublimation, unfinished and unsatisfactory in Freud, even in his rich and productive text on Leonardo and his art; with a reformulation of the problematic of parental ‘primal scenes’ by Jacqueline Lanouzière in relation to the mother-child couple and the experience of breast-feeding (and an analysis of Giorgione’s enigmatic painting La Tempesta); with a return to the classical debates on female sexuality by Jacques André, and a reconsideration of the question of precocious vaginal eroticism and a critique of the orthodox thesis of phallic primacy, in order to articulate the presence in Freud’s work of a subordinated counter-thesis that emphasises a primordial and repressed femininity in what André calls elsewhere the ‘orifice-infant’ (l’enfant orificiel) in both sexes, legible through the lens of the theory of seduction and implantation. Laplanche’s short set of theses on narrativity and hermeneutics reflects on the primal anthropological situation of the human infant, to emphasise the centrality of interpretation and translation in that situation, indicating briefly an important affinity with the philosophy of Martin Heidegger in order to question the retrospective ‘constructivism’ and relativism of the ‘narrativist’ current in contemporary psychoanalytic thought. The essay by Dominique Scarfone also elaborates further the understanding of the primal situation of transmission, seduction and translation between adult and infant in order to develop Laplanche’s pregnant theses on psychosis and the superego as psychotic enclave. Finally I have included Guy Rosolato’s return to the problematic of the ‘primal fantasies’ in Freud, the topic of Laplanche’s early and now classic essay with J.-B. Pontalis from 1964, a panoptic survey that brings out the structural homologies between the scenarios of the primal fantasies and a wide range of cultural formations and myths. Unlike the other writers collected here, Rosolato is of Laplanche’s generation and of a Lacanian formation, a writer who has maintained a career parallel to Laplanche’s and an independence in relation to the orthodoxies and splits of contemporary Lacanianism. He concludes his extensive cultural mapping by positioning it in relation to Laplanche’s recent work on primal seduction.