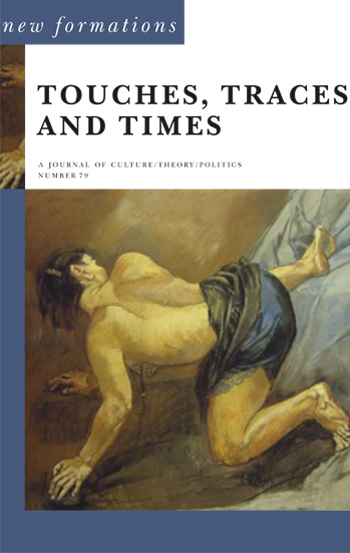 Although this is officially an ‘unthemed’ issue of New Formations - collecting simply the best unsolicited submissions received by the journal over the past two years - the resonances and convergence between its various contributions are remarkable. Every article here is concerned in one way or another with issues around the theorisation of experience, affect, and temporality: with the technologically, temporally and socially distributed nature of experience. Several essays concern themselves in novel ways with the unstable relationship between the interior self and the surfaces on which it is reflected or expressed, and whose interrelationships are its condition of im/possibility. The irreducibly social and technological character of existence is a key theme which runs across several contributions. The historical specificity and/or the conceptual insufficiency of orthodox psychoanalytic doctrines is a recurring theme, explored here in an array of polemical and analytic contexts. The importance of the early twentieth century as a key point of historical and intellectual reference comes up in several different ways, even while other key moments - from the moment of Kant’s formulation of the modern subject to the events of 1968 to the present day - are crucial as well.