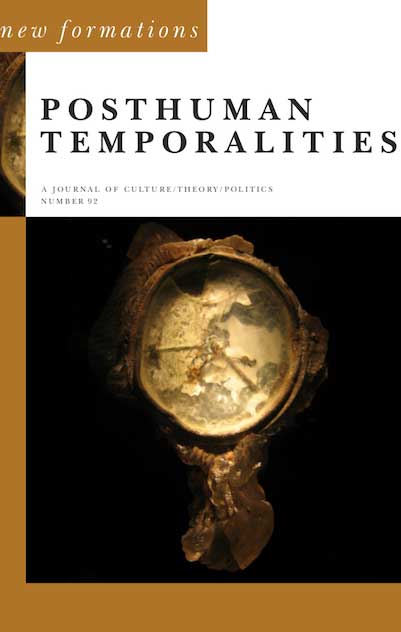 Troubling time/s and ecologies of nothingness: re-turning, re-membering, and facing the incalculable

This paper examines the political-ontoepistemological-ethical implications of temporal dis/junction by reading insights from Quantum Field Theory and Kyoko Hayashi’s account of the destruction wrought by the Nagasaki bombing through one another. The diffraction [indeterminacy] of time at the core of quantum field theory, troubles the scalar distinction between the world of subatomic particles and that of colonialism, war, nuclear physics research, and environmental destruction; all of which entangle the effects of nuclear warfare throughout the present time, troubling the binaries between micro and macro, nature and culture, nonhuman and human. Barad thus attempts to think through what possibilities remain open for an embodied re-membering of the past which, against the colonialist practices of erasure and avoidance and the related desire to set time aright, calls for thinking a certain undoing of time; a work of mourning more accountable to, and doing justice to, the victims of ecological destruction and of racist, colonialist, and nationalist violence, human and otherwise – those victims who are no longer there, and those yet to come. This task is related to rethinking the notion of the void. Against its Newtonian interpretation as the absence of matter and energy, as that which does not matter and thus works to justify colonial occupation, Barad understands the void in terms of Derrida’s hauntology; a spectral domain where life and death are originarily entangled, and inanimate matter itself gives itself to be thought in its mortal finitude. The void is rather the yearning and the imagining of what might yet have been, and thus also the infinitely rich ground of imagining possibilities for living and dying otherwise.