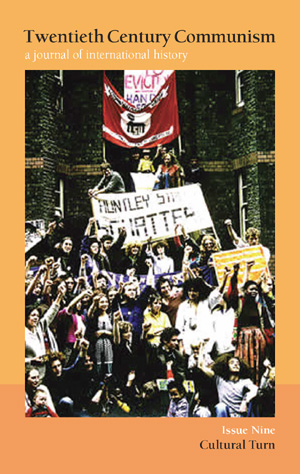 British Marxist Historians and Socialist Strategy: Within, Beyond and After the Communist Party

British Marxist Historians and Socialist Strategy: Within, Beyond and After the Communist Party
Adria` Llacuna, pages -

The names of Eric Hobsbawm, E.P.Thompson and John Saville do not require much introduction as their outstanding historical production speaks for itself, and they are widely known inside and outside the academic field of history. Even from the Spanish perspective, as far as this author is concerned, much of ‘the making’ of the social history in Spain has had a clear Thompsonian affiliation, while Hobsbawm’s interpretation of contemporary history in his famous tetraology is commonly referred to and widely circulated.2 Their works, which are so central to the historiography of the twentieth century (and also of the twenty-first) are not only important in themselves, but are even more illuminating if they are placed in the historical and intellectual context in which they were produced. Recently, their contribution to the understanding of the ‘long’ contemporary era has inspired several new studies which have scrutinised the biographical, intellectual and historiographical context in which their work was created. This essay considers three key recent books which all shed light on the importance of the intellectual and political formation of each of these historians on several levels: as individuals; in terms of their engagement in the creation of an indigenous marxist interpretation of history through the institutionalised form of the Historians’ Group of the Communist Party of Great Britain (CPGB); in the context of the historiographical and political contributions they made after distancing themselves or breaking with the party during the crisis of 1956; and finally, the different political interventions they tried to articulate on the British Left during the several decades following 1956, which grew in parallel with their expansive historical writings.

To cite this article
Adria` Llacuna (2015) British Marxist Historians and Socialist Strategy: Within, Beyond and After the Communist Party, Twentieth Century Communism, 2015(9), -