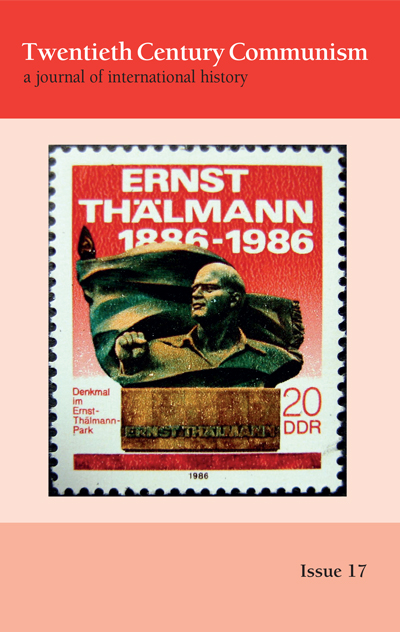 ‘Legends have a tenacious life’: Ernst Thälmann, the First World War and memory in the GDR

‘Legends have a tenacious life’: Ernst Thälmann, the First World War and memory in the GDR
Norman LaPorte, pages -

Despite Ernst Thälmann’s prominence in the German Democratic Republic’s official antifascist narrative, there was no ‘scholarly’ biography of him until 1979. The reasons for this shed light on the political culture of the Socialist Unity Party (SED) and its history-writing arm, the Institute of Marxism-Leninism – especially in the regime’s early years under Walter Ulbricht. The refusal to falsify Thälmann’s relatively conventional war record by the SED’s appointed biographer, party veteran Rudolf Lindau, was a refusal to expunge his own party history from official memory. As a founding member of the International Communists of Germany (IKD), which was close to Leninism during and immediately after the war, Lindau did not want to contribute to myth-making which failed to account for the actual wartime antimilitarism of his own proto-communist grouping. The feud was part of wider debates in the SED about the nature of the November Revolution and the origins of the German Communist Party (1918), which ultimately identified the Spartacist tradition as the party’s official heritage. Of course, Lindau could not change the party line; but he was given very considerable latitude to disseminate his own views within party circles. He only came into conflict with the party leadership after being accused of building a ‘platform’ (i.e. taking collective action) in the early 1960s and even then met no serious sanction. In short, the SED was not the monolith of cold-war cliché. Instead, it tried to maximise the latitude given to old Communists from a diversity of party traditions.

To cite this article
Norman LaPorte, (2019) ‘Legends have a tenacious life’: Ernst Thälmann, the First World War and memory in the GDR, Twentieth Century Communism, 2019(17), -