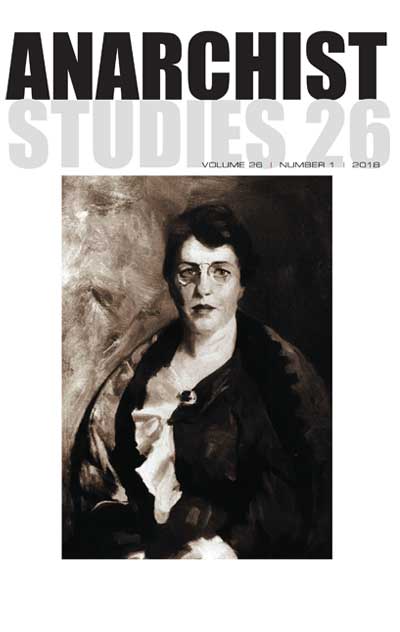 About this issue’s cover

Portraitist Robert Henri is well known in the history of American modernism for promoting a succession of juryless, artist-organised exhibitions during the first two decades of the twentieth century and for influencing hundreds of students through his teaching.1 Specifically, his style of painting, which emphasised artistic spontaneity through the quick application of paint, had a wide impact. Henri regarded his expressive palette as synonymous with ‘individuality and freedom in art’, a stance which led him to anarchism, most likely in the late 1880s, when he was living in France (Henri, who was fluent in French, resided in Paris over three extended periods: 1888-1891; 1895; and 1898-1900).2 Evidence of anarchism’s importance for Henri is legion. For example, his close friend and fellow artist John Sloan, who first met him in 1892, recalled he ‘was an anarchist and had no sympathy with my devotion to socialism’ (Sloan would later become active in the American Socialist Party in 1910 and run twice as a Socialist Party candidate for the New York State legislature).3 In keeping with this position, in 1893 Henri gave Sloan Mikhail Bakunin’s God and the State (1882), a passionately argued condemnation of State power and institutional religion as mechanisms of class oppression.4

2. Robert Henri, ‘Progress in Our National Art Must Spring from the Development of Individuality of Ideas and Freedom of Expression: A Suggestion for a New Art School’, The Craftsman 4 (January 1909): 387-401. On Henri in Paris, see ‘Robert Henri, Chronology’, John Sloan/Robert Henri: Their Philadelphia Years, 1886-1904, Deborah Allen (ed.), (Philadelphia: Moore College of Art, 1976), pp59-60.