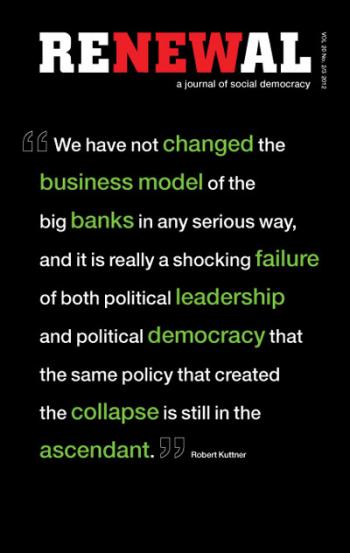 Obama and the prospects for American progressives: Interview with Robert Kuttner

As the US presidential election enters the home straight and the British political class over- indulges in the minutiae of Obama’s re-election battle, Robert Kuttner provides a more radical appraisal of the American political scene than is usually purveyed to a British audience. Kuttner has a distinguished track record as a progressive journalist, commentator, and editor: he has been the Washington editor of The Village Voice; a national staff writer on The Washington Post during the Watergate era; and economics editor of The New Republic. He was a long-standing columnist for Business Week, and continues to write columns for The Boston Globe. Along with Paul Starr and Robert Reich, Kuttner founded The American Prospect in 1990, and has since played a key role in building the new magazine into an important venue for American liberal debate. Alongside these journalistic commitments, Kuttner has written numerous books on economic policy and politics, including Everything for Sale: The Virtues and Limits of Markets (1997); The Squandering of America (2007); Obama’s Challenge (2008); and A Presidency in Peril: The Inside Story of Obama’s Promise, Wall Street’s Power and the Struggle to Control our Future (2010). Across this impressive body of work, Kuttner has offered sustained advocacy of a liberal politics that seeks to marry American economic dynamism with the pursuit of social justice and a deeper democracy. A trenchant critic of the right-ward trajectory of the Democrats over the last twenty years, Kuttner reflects in this interview on Obama’s first term in office; the ideological contours of the Democratic Party; the opportunities for a new political settlement presented by the financial crisis; and, of course, on the presidential campaign now hurtling towards its conclusion.

To cite this article
Ben Jackson (2012) Obama and the prospects for American progressives: Interview with Robert Kuttner, Renewal, 20(2-3 ), -