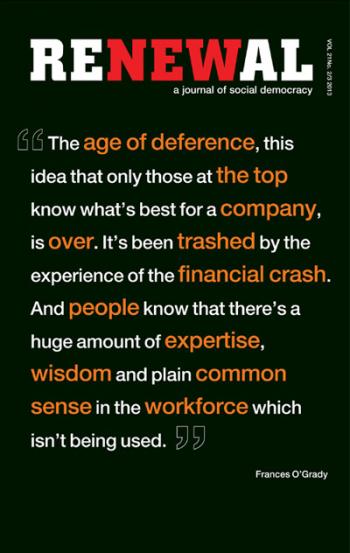 Beyond living with capitalism

In 1994 Dan Corry wrote an article in Renewal on the shape of Labour’s macroeconomic policy (Corry, 1994). After almost twenty years it is striking how relevant much of the article still feels. The original piece was entitled ‘Living with capitalism’ but today’s Labour economic policy appears to have moved beyond simply living with capitalism and is setting out an active agenda of how to change and shape it.

Labour’s macroeconomic policy has moved through several distinct stages over the past two decades and the very definition of what exactly constitutes a ‘macroeconomic policy’ has been contested. In the early 1990s traditional macroeconomic policy (defined as the use of fiscal and monetary policy to impact upon macroeconomic variables such as growth, inflation and unemployment) was downplayed in favour of an agenda of supply-side reforms. In the mid-1990s a brief flirtation occurred with a more rounded approach to ‘political economy’, as opposed to simple macroeconomics, focused on the concept of a stakeholder economy. But this eventually gave way to a macroeconomic framework of ‘constrained discretion’ for policy-makers (Bank of England independence and fiscal rules) and a renewed focus on straightforward supply-side reforms. The notion of fundamentally changing the UK’s national business model was quietly dropped.