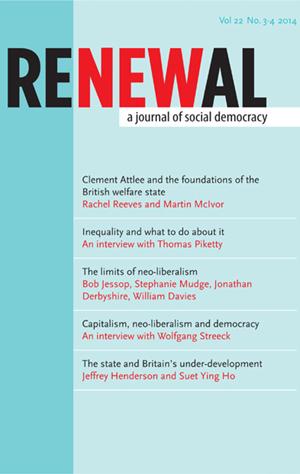 Inequality and what to do about it: Interview with Thomas Piketty

Inequality and what to do about it: Interview with Thomas Piketty
Martin O'Neill, Nick Pearce, pages -

Thomas Piketty’s Capital in the Twenty-First Century (Piketty, 2014) is the most talked about work of political economy to have appeared in recent years, if not decades. Since its publication in French last year (Piketty, 2013), and the subsequent publication, earlier this year, of its limpid translation into English by Arthur Goldhammer (Piketty, 2014), Piketty’s book has received critical acclaim worldwide. Paul Krugman has described Piketty’s book as ‘magnificent, sweeping meditation on inequality’, which has wrought ‘a revolution in our understanding of long-term trends’ (Krugman, 2014). Branko Milanovic, former lead economist of the World Bank, describes Capital in the Twenty-First Century as ‘one of the watershed books in economic thinking’ (Milanovic, 2014), while Jacob Hacker, progenitor of the idea of ‘predistribution’ (see Hacker, Jackson & O’Neill, 2013), has described Piketty as ‘a Tocqueville for today’ (Hacker and Pierson, 2014; see also Paul Segal’s review essay in this issue of Renewal).

Piketty’s book has also begun to shape the way in which parties of the left think about the challenges they now face in creating a more just and equitable economic settlement. Shadow Cabinet member Stewart Wood, one of Ed Miliband’s most thoughtful advisers, has described Piketty’s work as ‘providing an intellectual foundation’ for many of the things that the next Labour government will hope to do in tackling inequality and falling living standards (Eaton and Wood, 2014; see also Pearce, 2014). Although Miliband has joked in interviews that he has read ‘only a few pages’ of Piketty’s Capital, the truth is that, as Miliband himself knows well (see e.g. Miliband, 2011, 2014; Eaton, 2014), social democratic politicians can only hope to triumph in the future if they get to grips with the full implications of Piketty’s meticulous diagnosis of our current malaise of extreme and worsening inequality, and if they are prepared to take political steps to fight inequality that are of a scope and scale to match the daunting dimensions of the problem of inequality itself.