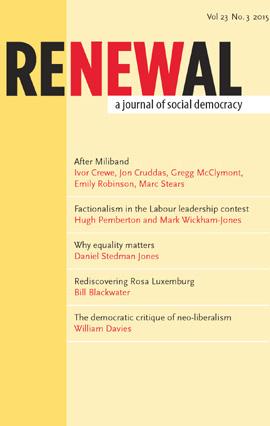 ‘Whatever is my right as a man is also the right of another; and it becomes my duty to guarantee as well as to possess.’ Tom Paine, Rights of Man, 1791

Labour’s devastating electoral defeat reveals that social democracy remains in crisis. The hope that economic crisis had changed politics has so far proven misplaced. Instead, flawed and limited neo-liberal assumptions about equality, freedom and power are more entrenched than ever. This is to be witnessed in Osborne’s frighteningly assured shrinking of the state. Yet, neo-liberalism is still not properly understood and, in its disarray, social democracy is struggling to mount a coherent response.

In the twentieth century, the New Deal and Attlee Labour Government succeeded by uniting progressive liberalism and social democracy around the ideal of a more equal society. Socialism was almost completely absent in the US. Despite its disproportionate totemic significance, Labour success owed little to clause IV. Rather, reformers convinced the public that they had the solutions to depression and the aftermath of war. Similarly, domestically at least, the Democratic Party and Labour Party in the 1960s briefly connected social and cultural change to the politics of hope.